(Vietnam+) - The 16th Meeting of the ASEAN Trade Facilitation Joint Consultative Committee (ATF-JCC) was recently held by the Ministry of Industry and Trade (MoIT) in Hanoi. 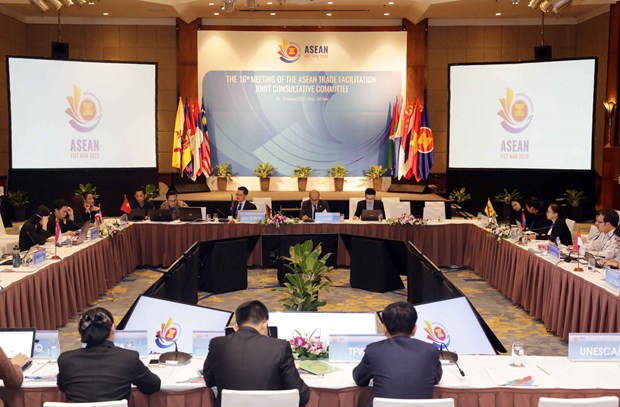 The 16th Meeting of the ASEAN Trade Facilitation Joint Consultative Committee (ATF-JCC) was recently held by the Ministry of Industry and Trade (MoIT) in Hanoi.

The meeting on January 10 was the first on economic issues organised by the MoIT in Vietnam’s 2020 ASEAN Chairmanship.

Luong Hoang Thai, Director of the MoIT’s Multilateral Trade Policy Department, said the event discussed the cooperation in facilitating intra-ASEAN trade and consulted about initiatives such as simplifying customs procedures with the aim of reducing 10 percent of trading cost within the bloc in 2020.

Issues put on the table also included the establishment of a mechanism for exchanging information about non-tariff measures (NTMs), the increase of consultation between ASEAN governments and the business community, and a proposal for regulatory impact assessment of NTMs.

The meeting updated the database on NTMs built by ASEAN’s partners to publish on the ASEAN Trade Repository and the national trade repositories of the member countries. It also proposed the organisation of workshops and capacity building for the nations.

Thai noted that as the chairman, Vietnam actively conferred with other ASEAN members, the ASEAN Secretariat, the bloc’s specialised agencies and partners to help the meeting reach unanimity on the issues raised at the meeting./.

Chairman’s Statement of the 37th ASEAN Summit: Cohesive and Responsive